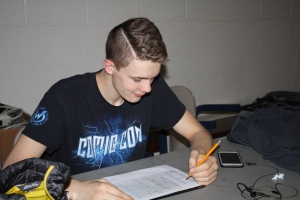 Everyone knows the players. Crowds shout their names as they score the winning three-pointer with a few seconds left. Teammates cheer them on as they break records.

Behind the sidelines keeping score or counting those players’ stats is the manager. The role of a team manager is helpful and important to a team, and is a good experience for students.

“During meets I usually am a timer in case the pads don’t work or if they don’t have pads. During practice, I fill up water bottles, take attendance and help the coach time different girls during sets.” Ball was on the men’s swim team in the fall and became the women’s manager because he wanted to help his coach. Ball said he recommends people become interested in being a manager, “They have to be committed.”

“I would recommend [managing] because it’s fun learning about new sports, and you get to meet a lot of people and share very fun experiences with them,” Hayes said.

During matches Hayes scores and records all matches. During practices she fills up the wrestlers’ water bottles, makes bags with their warm up clothes and singlets and gets ice, and if a wrestler gets hurt, she and the other six managers do anything they can to help.

“I was interested because I knew I didn’t want to play a winter sport, but I still wanted to be involved in a sport.” Hayes played JV softball in the fall.

“I picked wrestling since I had no idea what it was like,” Hayes said. “I have learned a lot.”
Junior Nicole Preston managed the JV softball team this fall season.

“During practices and games I would help the girls warm up and do anything the coaches needed. I also made sure they had all of the correct equipment out and knew what they were doing since many of them were freshmen, just learning how things worked at the high school level. I wanted to become a manager because I had played softball the last two years, but over the summer I became injured (something called metatarsalgia) and asked Coach [Bryan] Gibson if I could manage, the same thing I saw a girl do during my freshman year. I would definitely recommend more people to manage a sports team, even if you don’t play that sport or aren’t athletic, it’s extremely helpful to the teams and the coaches are very appreciative of it.”