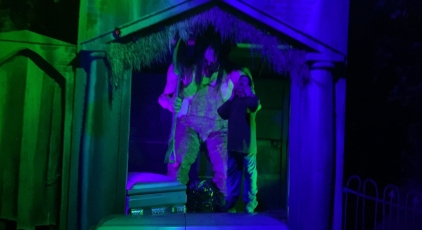 Halloween can easily be a tame and child-friendly holiday, or to the more thrill seeking part of our human race who will pay someone hard earned money to chase them around with a chainsaw.

Naturally, Jackson Parks (editor-in-chief) and Ava Musgraves (print editor) decided to get chased around with a chainsaw to observe if Creepyworld, a local outdoor series of haunted houses, lived up to its name.

Creepyworld is open through Halloween after being open a few select weekends in earlier October. Sunday through Thursday it is open 7-9:30 p.m., Friday through Saturday it is open 6:45-11:45 p.m. and on Halloween it will be open from 7-11 p.m. Tickets are $30 and are available for purchase on site or online.

Friday Oct. 15, we set out to Fenton, MO. After standing in line, in about 50 degree weather, a faint rain dusting the crowd caused everyone to be a little damp and a little more anxious.

To keep anticipation high to enter the string of 13 themed houses, actors dressed as various characters including Freddy Krueger, clowns, zombies, ect. We experienced a personalized approach from the actors that included them assigning us nicknames, like “blondie.”

Speakers line outside of the houses playing eerie music, and a deep voiceover claims Creepyworld to be “America’s biggest and scariest scream park.” The entrance is thought out in a smart way. The whole park is kept dark and moonlit. The rain just added to the ambiance, thrill seekers shouldn’t let the forecast turn them away. Visitors warm right up as soon as they’re in the door.

What sets CreepyWorld apart from other haunted houses is the intense dedication the actors bring to their characters. As a collective we felt actual fear, as the whole experience takes about an hour and a half, and they did not give us time to catch our breath

“Monsters” jump out from behind dark corners, acting as a statue until patrons dare to cross by. They also wait behind the door and chase visitors all the way to the next house, calling names, keeping the whole experience very immersive.

This immersive experience is not for the faint of heart. By about house four we were both ready to be done and back in the car safe and sound as exhilaration proves to be quite exhausting We don’t know if they train these people in parkour or something because they actually were jumping from surface to surface to chase us through onto the next house leaving no room for avoidance.

Aside from the actors, the actual rooms left us disoriented and vulnerable with strobe lighting, mazes, and literal (fake) hanging dead bodies from the ceiling we had to walk through. The whole time we both felt a sick and nauseated feeling.

The experience affected us physically and emotionally as Ava was gripping on to Jackson as we took the walk up through a wooded area back to the car and Jackson insisted we pull into the nearest QT because he “felt like he was going to puke.” He did end up puking in the Ballwin QT while Ava got a slushie because the experience left her feeling parched.

“I barely ate that day, and I was scared.” Jackson said about what caused him to puke.

The scariest part was when “there was a guy with long hair and blood dripping down his face who wouldn’t stop chasing us. I almost peed my pants”. said Jackson.

Part of the disorienting nature of the experience was “they never did tell us where to go. I would change the directions they give you.” Jackson said.

“It felt at times they were touching me or my hair they were that close to me. The only thing that got me through it was the fact that they weren’t actually allowed to touch me. I was clinging to Jackson for dear life, so honestly there was not a point when I wasn’t scared. The worst part was you never knew what was coming next,” Ava said.

To conclude, for people who are looking for the “Scariest Scream Park in America,” after attending CreepyWorld, the editors of the Echo believe they can find that thrill right down in Fenton.

Like Loading...
‹ Animated Halloween movies may be upsetting to children
Trick or treating gets ‘green light’ from expert ›