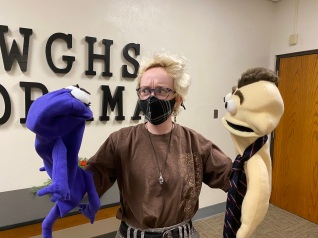 Senior Amelia Griesedieck demonstrates puppeteering in preparation for “The Meta Plays” by Andrew Bliss, a series of eight one-act plays that break the fourth wall and teach something about theatre. The performance will be Wednesday, May 12, at 7 p.m. in the auditorium. Photo by Zeke La Mantia

Theatre during a pandemic presents several challenges for all involved. The drama department has in spite of this put on multiple productions including recently, “The Glass Menagerie” and now “The Meta Plays.”

“The Meta Plays” are student directed, which allows for more student involvement than previous productions. The production is made up of eight ten-minute plays, all about the art form itself; theatre (hence the word “meta” in the title).

The format allows for students to experience directing and acting in under a two-hour show, offering a “well-rounded experience,” senior Amy Griesedieck said.

Griesedieck is new to the directing scene in the department. Previously they have acted in several productions as well as ran the sound board.

“It’s just a challenge, but a good one. It’s something new I get to do, and I’m excited about that,” Griesedieck said about directing her play amongst the Meta Plays, “The Skewed Picture.” They will also be acting in “A Rebel Amongst the Wretched” which is directed by sophomore Cat Draney, giving all parties involved a chance to work onstage and off in such a hard year for theatre.

“I like acting and directing about the same. Probably acting a little more. I think you get a better idea of what theatre really is and a better perspective on what goes into a show, and you get to end up working on more shows which is always fun.” Griesedieck said.

The Meta Plays will be performed May 12, at 7 p.m. in the auditorium. Admission is free with a maximum of 175 people in the audience, masked and distanced.