As junior Danielle Daniels stepped to the foul line with 3.7 seconds left and Webster’s lead down to one, a flashback was playing through senior Maggy Moran’s head.

Just a quarter before, Cor Jesu had stolen the momentum from the Stateswomen with a shot from just inside halfcourt at the buzzer. Now, with Webster’s late nine-point lead evaporated and its District title hanging in the balance, the threat loomed again.

“All we talked about at the two practices before this game was how good a three-point shooting team they are.” Moran said. “They are more than capable of making a halfcourt shot.”

Daniels missed both of her free throws, Moran wrestled away a game-saving offensive rebound, and Webster ran out the clock on a dramatic 60-59 win over Cor Jesu to capture its second consecutive District championship.

The Stateswomen had to survive a harrowing finish to escape the instant classic. After junior KK Rodriguez’s fast break layup broke a full court press and gave Webster a nine-point lead with 30 seconds left, things started to unravel.

Junior KK Rodriguez takes a layup around a defender for Cor Jesu in the District title game. Photo by Andy Kimball

Cor Jesu converted an and-one, missed the free throw, got an offensive rebound and made the putback, getting fouled again. This time the Chargers completed the three-point play for an unusual five-point possession. Webster’s lead had suddenly been trimmed to 60-56.

The Stateswomen went to the line and missed the front end of a one-and-one with 15 seconds left. Cor Jesu got fouled again in transition, and after making the first of two free throws, the weird bounces kept going their way when they pulled down another offensive rebound and got fouled yet again.

With 4.5 seconds left, the Chargers hit both foul shots to cut the lead to 60-59. After Webster took a timeout, they were able to inbound to Daniels, who went to the line with 3.7 ticks remaining.

Cor Jesu used its last timeout after Daniels missed the first. The ball fell into a scrum in the lane after the second rimmed out, but Moran pulled it out of the pile and dribbled out of traffic, eluding defenders near the sideline in front of the Webster student section and across from the bench as time expired. 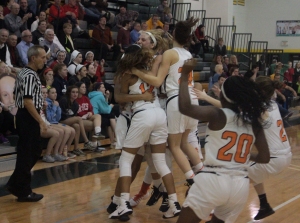 The Stateswomen rush the court in celebration after Maggy Moran’s rebound seals them the District championship. Photo by Andy Kimball

“I repeatedly told myself before she took the free throw not to foul no matter what, and soon as I know it the ball was in my hands,” Moran said. “The feeling when I got that rebound couldn’t have been better. This could have potentially been my last game; to come out with a huge offensive rebound was awesome.”

As time ran out, the overwhelming relief was evident in the team as players rushed the floor to mob Moran. Cor Jesu had battled back from down 12 in the final minutes to beat Oakville in Monday’s District semifinal, so narrowly dodging more late magic from the Chargers was enough to lift a mountain off the shoulders of the Stateswomen.

The near-comeback was a 25-second, 8-0 burst fueled by four Webster fouls and two Charger offensive rebounds.

“That’s just how Cor Jesu plays,” head coach Patti Perkins said. “I knew they weren’t going away, I’m just glad we pulled it out at the end.”

Prior to the last minute, Webster had kept its composure with incredible resilience all game. After jumping to an early nine-point lead, the team had to swallow an 8-2 second quarter run that tied the game at 19. Junior Jaidah Stewart answered with a go-ahead three, and Webster eventually took a 25-23 lead into halftime.

Junior Jaidah Stewart converts an and-one during the Stateswomen’s 60-59 win over Cor Jesu to advance to the state round of 16. Photo by Andy Kimball.

It seemed like the Stateswomen had a three to answer every Chargers run. After Cor Jesu took its first lead of the game early in the third, Rodriguez hit a triple to put Webster up 28-26. Down 30-28 moments later, Rodriguez did it again, sparking a 9-0 run with another look from deep.

“KK really stepped up in the second half,” Moran said. “She really kept us in the game and was a really good leader on the floor.”

Webster’s shooting had Lindbergh High’s gym bouncing in the third quarter, but the momentum took a sudden turn when Cor Jesu drained the deep runner at the buzzer, cutting the Stateswomen lead to 43-42.

Webster’s three-point shooting didn’t ease up though. The team started the fourth quarter 3/3 and 4/6 from beyond the arc to stretch the lead to 55-47. Rodriguez hit two of the shots, while Daniels and freshman Elizabeth Zareh hit the others.

“Hitting those big shots brings us so much momentum that we use on defense,” Moran said. “It just makes the game so much more fun.”

Rodriguez scored 16 of her team-leading 21 points in the second half. She shot 4/4 from the outside in the half. Stewart added 18 for Webster before fouling out in the final moments.

“It’s crazy. Normally I don’t let them do that,” Perkins said on the frequent three-point shooting. “One of our keys tonight was to score in the paint, but you know, we’ll take it anyway we can get it.”

Zareh, who doesn’t get many chances to score, was also at the center of it. She wasn’t afraid to fire up threes at all, hitting two big ones in the second half.

“She had a big welcome to Webster Groves basketball,” Perkins said. “She had a great game, came off the bench and gave us a great spark.”

The Stateswomen kept their lead around eight and nine points for the last several minutes before the late dramatics began.

Webster will take on one of Missouri’s best, Jefferson City, next Wednesday in the sectional round of the playoffs.

The turnaround will be difficult heading into the tough matchup, but if there’s one thing that’s for sure, it’s that this District championship win will live on for a long time in Webster.