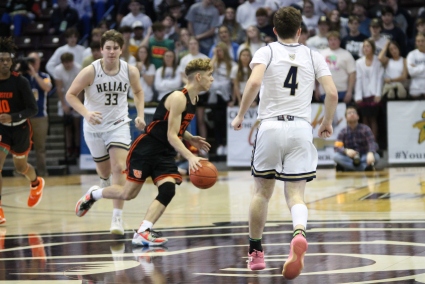 Sophomore Gianni Ferentinos steals the ball and dribbles down the court during the State championship game against Helias Catholic on March 19. Statesmen won 72-53. Photo by Emily Goben

Statesmen men’s basketball won the 2022 Show-Me Showdown, the State championship tournament for Missouri. This is the team’s third State title in six years.

The Statesmen defeated two-time defending State champion Cardinal Ritter with a close 60-57 win in the Semifinals, followed by a confident 72-53 win against Helias Catholic.

“Sometimes as a coach you just have a good feeling and by Saturday at noon I had that feeling. I was trying to stay focused but could just tell in my gut that this group was on a mission to finish,” head coach Justin Mathes wrote.

Chartrand said that the reason the team won is because they just kept playing, no matter the score.

“When it was the fourth quarter and we were winning by a good amount, no one had the mindset that the game was over, and our team played until the final buzzer, and that’s why we won State!” Chartrand wrote.

Sophomore Gianni Ferentinos emphasized the sacrifices that everyone on the team made – junior Jalen Purvey accepting the role of the sixth man, Chartrand guarding the opposing team’s best player every game and many team members sharing the ball, court and limelight despite their individual talent.

“I had to accept my role to space the floor and shoot when I’m open even though I definitely wanted to do more than that. That’s what it takes to win. Sacrifice for the greater good,” Ferentinos said.

“A lot of teams don’t want to do the little things that matter – diving on the floor, taking charges, playing hard – and that’s something we take pride in and represent,” sophomore Iziah Purvey wrote.

One thing that Purvey didn’t mention is the importance of good communication in a game like basketball, which is a skill that seems to occur naturally between Chartrand and Purvey. The two have an uncanny sense of when a pass is coming from the other, and the teamwork between these two has earned the Statesmen countless layups and three point shots this season.

“It’s not just that we won it, it’s how we won it. We were tougher and more together. We always talk about TTW (toughest team wins) and this group lived up to that matra. We were undersized all year and overcame it by outworking teams and being more physical. This team consistently showed the ability to rise to a challenge,” Mathes wrote.

This is Mathes’ first State championship trophy as head coach. He coached this team to a victory in just three years as head coach, setting a new record for Statesmen men’s basketball.

“My favorite stat of the season was that Matt Enright, our leading scorer, had zero points at halftime of the state championship and we were up by 23 points. It just shows how balanced this team was and how it was a total team-effort,” Mathes wrote.

The balanced nature of the team and the teamwork mentioned by Mathes led to a natural connection and common goal for all the players.

“Having a picture of how special our team is in Robert’s forever has been all of our goals since the beginning. The bond we have formed through all the adversity goes far beyond basketball, and that is what makes this moment so sweet,” senior and co-captain Matt Enright said.