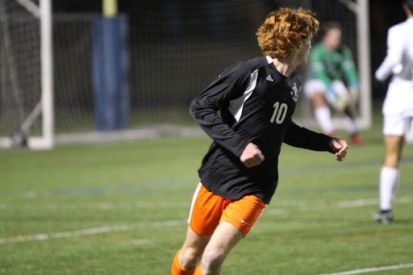 Senior Connor Stauss looks for the ball and runs up field on Nov. 2, in a 1-0 win against MICDS. Photo by Ava Musgraves

Men’s soccer team just capped off its season on Nov. 4. Its final record was 10-8-2 and ended with the District championship game against Ladue.

After a rough first few weeks, the Statesmen started off their first half of the season with a record of 3-4-1. The team was then able to bounce back with a second half season record of 5-3-1, making their regular season record 8-7-2.

The Statesmen kicked off the start of their postseason with a 2-0 win against Principia on Oct. 30. After that win, they went on to defeat MICDS 1-0 on Nov. 2. This win sent the team to play Ladue on Nov. 4. In the end, the team lost 2-1 in penalty kicks, ending its 2021 season.

“I think it would be a lie if I said that I was completely satisfied; however, I must add that I wouldn’t trade this season for the world,” senior captain Tom Spitzer. “I think being satisfied causes a person to not strive to be better. For me that might not be a big deal since my high school soccer career is over, but I hope and am fairly certain that none of the juniors and sophomores are satisfied with this season.”

“Obviously if I could I would change the result of the last game against Ladue. That result really crushed the whole team. We fought so hard to stay in the game and to keep our season going. Losing in penalties is really one of the worst ways to lose in my opinion because it really is a coin flip at the end of the day,” Spitzer said about how he felt about losing the final game against Laude in penalty kicks on Nov. 4.

“One thing I would change was me scoring in the penalty shootout against Ladue, but the one of many things the team did well was believing. We had ups and downs, but we never stopped believing in each Other and in the way we got coached and played,” senior captain Ben Allison said.