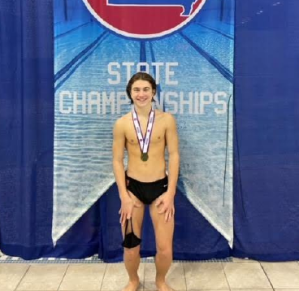 About his feelings on the championship, Loving said, “It feels pretty amazing to win State. You don’t really believe it at first, but after a while it starts to sink in. I was surprised when I won mainly because I had to make a huge comeback to win… My teammates always cheered me on, which helped a lot. My coaches were really supportive and my dive coach was really nice and calm when it came time for state.”

Loving also said he plans on defending his first place title next year and the following years until he goes to college. He plans to go to college for diving and hopefully receive a scholarship.

Leah Lynch, diving coach, said, “Bennet has worked incredibly hard during this season as well as the off season which has led to his success. Through all of this success, he has remained humble and gracious.”