It seems that hockey in St. Louis couldn’t get any better. A Stanley Cup win and sitting atop the league in points are all part of what has made hockey so entertaining for St. Louis Blues fans and WGHS students.

However, another event that came to Enterprise Center allowed fans to celebrate not just the St. Louis Blues, but the whole National Hockey League (NHL) and its best players.

This year, the St. Louis Blues hosted the 2020 NHL All-Star Game for the third time in franchise history. 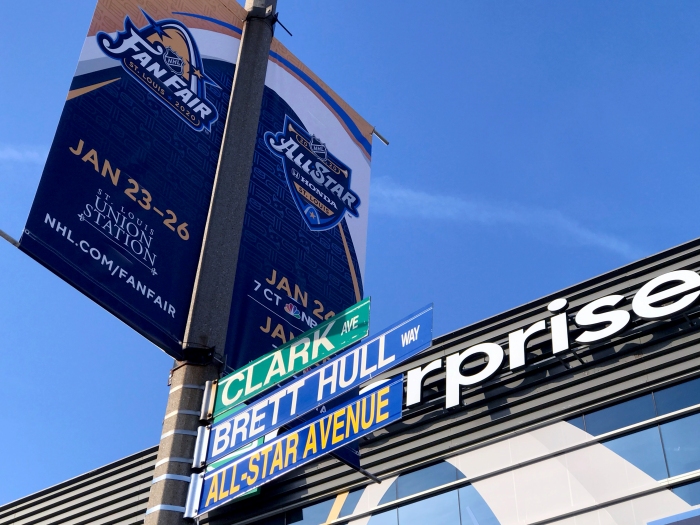 Clark Avenue is home to Enterprise Center, where the 2020 NHL All-Star Game took place. For the weekend, the street signs were also adorned with the names of Blues alumni and “All-Star Avenue.” Photo provided by the St. Louis Blues

Senior Evan Furfaro said, “I feel it brought a little more recognition to the great people who have been through our city.”

All-Star weekend took place starting on Thursday, Jan. 23, with an alumni game at the new Centene Community Ice Center. However, the biggest events started on Jan. 25, with the NHL skills competition. The best players from the NHL skated to decide who was the fastest, most accurate, hardest shot and best goalie.

“The alumni and players who either played here in St. Louis, or were from St. Louis provided more excitement to the crowd during events,” Furfaro said.

On Saturday Jan. 25, the NHL All-Star Game took place. This game combines players from around the league into four teams competing in a tournament-style matchup.

Furfaro said, “I personally enjoyed the presentation of the Blues players, not only because it was the Blues players but because they were announced by Laila Anderson. It was heartwarming watching every Blues player come out and give her a hug after their names were called.”