The show is written by John Kander, Fred Ebb and Bob Fosse. The directors chose this play because they feel it holds a mirror to current issues in America.

Massena said, “We believe ‘Chicago’ reflects a crisis that is in our country today; the guilty rich get away, and the innocent poor are punished.”

According to Schaefer, “We have a liar problem that has hit an obscenity that needs to be addressed right now.” 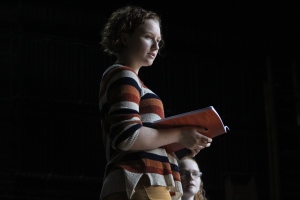 Senior Zia Massena, assistant director, gives instructions at an afternoon rehearsal of the fall play, “Chicago,” which will be performed Oct. 24-26. Photo by Zeke LaMantia

Schaefer cited the need for a female-driven musical, “We’re in a female year, and we needed a show representing women.”

“Chicago” is a musical about female criminals being treated as celebrities and is known for numbers such as “Mr. Cellophane” and “All That Jazz.”

The characters lie and get off easy for their crimes because of public attention and sympathy. The women who are the wealthiest and who have the most heartbreaking stories escape justice. The women who are of a lower economic class have a tendency to tell the truth and stay locked up.

Roxie, played by S. Massena, is a wannabe socialite singer who gets caught up in an affair. She murders a man and ends up in prison where she devises a plan to be acquitted of the charges.

“Originally, I wasn’t going to audition, and I was going to be costuming instead, but I decided to audition because I thought it would be fun, and then I got the lead and decided to do it anyway,” S. Massena said.

A. McCann, who plays Velma, is both excited and nervous to hold a lead role and perform the opening number.

“I think that we’ll all feel very prepared for opening night because everyone is super committed. For me, I get myself into the right head space and I have warmups that I do before every show,” A. McCann said.
“Working with the cast has been different than past shows because there are so many people that are new to theater, but they are adjusting and learning really fast which is cool to see,” A. McCann said.