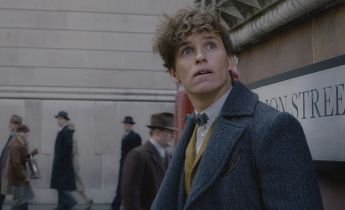 “The Crimes of Grindelwald” came out on Nov. 16, and it runs for two hours and 13 minutes. Image from Fantasticbeasts.com

“The Crimes of Grindelwald,” sequel to “Fantastic Beasts and Where to Find Them,” was released on Nov. 16, in theaters across the United States.

J.K. Rowling, author of the Harry Potter series and producer of “Fantastic Beasts and Where to Find Them,” continues to milk her literary legacy for all its worth by co-directing both movies.

Not only could “The Crimes of Grindelwald” not redeem the messy intertwining plots of its predecessor, but it could not sustain its own plot, conflict and characters. The attempt to include references from the actual Harry Potter books, such as young Albus Dumbledore’s relationship with Grindelwald and Voldemort’s snake, Nagini, is valiant, but ultimately muddles the plot and end goal of the story.

The movie’s multiple storylines all have potential to take the story to new heights, but most are not sustained. Midway through the film, there are three love stories, three confusing past-lived relationships emerging in the present, more than three underdeveloped characters, and multiple conflicts improperly introduced in the preceding story.

Without prior knowledge of the series, it was unclear to the audience who Grindelwald was when watching the first movie, and even then, it hardly developed his character at all. With Grindelwald emerging as the leading antagonist in “The Crimes of Grindelwald,” much of the audience will still be confused about his motives and the actual conflict itself.

It’s unclear whether director David Yates was ignorant enough to cast Johnny Depp as Grindelwald, or if he wanted an actor as cruel as their character. Either way, it was not a wise choice.

Depp was accused in December 2015 by his ex-wife and actress, Amber Heard, of physically abusing her. Heard later reported multiple other incidents of violence and misconduct from Depp before finally getting a temporary restraining order in May 2016. The divorce case was settled in 2016, and the cinematic world went back to loving Depp. Heard was unheard, and Depp continues to receive roles he doesn’t deserve.

Original Harry Potter, Daniel Radcliffe, said, “I’m not saying anything that anybody hasn’t already said — and this is a weird analogy to draw — (but) in the NFL, there are lots of players arrested for smoking weed, and there is other people’s behavior that goes way beyond that, and it’s tolerated because they’re very famous players.

“I suppose the thing I was struck by was, we did have a guy who was reprimanded for weed on the (original Potter) film, essentially, so obviously what Johnny has been accused of is much greater than that.”

Rowling defended Depp, saying, “Based on our understanding of the circumstances, the filmmakers and I are not only comfortable sticking with our original casting, but genuinely happy to have Johnny playing a major character in the movies.”

“The Crimes of Grindelwald” is rated PG-13 for fantasy action. The film runs for two hours and 13 minutes.