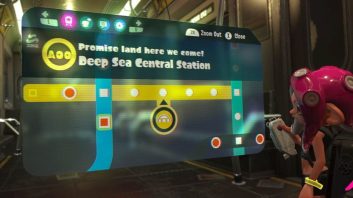 Agent 8 travels through an underground facility using a metro map. Image from Nintendo

Though “Splatoon 2” is most known for its fantastic multiplayer and constant free updates, its single-player campaign excels as well, and “Splatoon 2: Octo Expansion” is well worth the wait for extra campaign content.

“Octo Expansion” takes place adjacent to the game’s main campaign, Octo Canyon, and explains the whereabouts of characters missing from its plot. Captain Cuttlefish, the commander of the Squidbeak Splatoon, finds himself trapped in an enigmatic underground metro station after being separated from Agent 3, the protagonist of the Octo Valley campaign from the original “Splatoon.”

Cuttlefish meets Agent 8, an amnesiac Octoling from the Octarian army who’s also trapped. Despite tensions between Inklings and Octarians, they realize they have no quarrel and team up to find Agent 3 and escape. The two are helped by Pearl and Marina from the band Off the Hook, who locate them over radio and fill the supportive roles that the Squid Sisters, Callie and Marie, did in previous campaigns.

To leave the facility, Agent 8 must complete levels marked by stations on a subway map. The expansion’s brilliant approach to progression uses 10 intertwining train lines with certain missions available on multiple lines and completing said missions unlocks crossing lines. Missions can be played in any order, and not all 80 missions are required to finish the story, as only specific spots must be reached to collect necessary items.

Unlike Octo Valley and Canyon’s longer levels, missions act similarly to shrines from “The Legend of Zelda: Breath of the Wild” or bonus rooms from “Super Mario Odyssey,” being short one-off challenges. While the original campaign was designed to teach players mechanics for multiplayer through stealth platforming, “Octo Expansion” explores those mechanics far beyond their usage in multiplayer in various mission types, which is perfect for the series’s unique mechanics.

Stations are entered with CQ Points, currency handed out by the train’s conductor, C.Q. Cumber. A set amount of points are needed to enter levels, and by completing levels, the player earns a higher point payout. Since levels are designed around one to three weapon loadouts, the player can choose risk VS reward: weapons that make stages easier give lower point payouts, but more difficult weapons offer more points.

Missions are challenging, but most of them can be completed with a good understanding of their mechanics, as the DLC is intended for players who finished Octo Canyon. Only a fraction of stations were ever too challenging, but if the player has issues with a level, Pearl and Marina offer to hack into the metro’s system to allow the player to progress, though they receive no points for the level.

The Splatoon series’s signature writing style continues to shine through dialogue, references and puns, but “Octo Expansion” takes a new approach to storytelling in particular. While Agent 8 has a fairly simple backstory, the player can read Internet chat logs between Cuttlefish, Pearl and Marina, which acts as a way to explore their backstories and give entertaining character interactions even inside the isolated facility.

The chat logs aren’t just entertaining, as the comedic interactions eventually turn into a commentary on racism. However, rather than plaster subtext in without any nuance as less engaging scripts do, especially in more conventional storytelling media (see films like “The Happytime Murders”), “Octo Expansion” explores the dangers of casual racism and how even well-meaning people can have hurtful actions, which it handles in a surprisingly realistic and mature manner.

The game’s vibrant graphics are contrasted by underground thematic elements, as it truly sells the aesthetic of a grungy metro station secluded from the colorful Inkopolis. The art style mixes in bits 80s music videos, including neon grid victory screens. Character designs and redesigns stand out from the already visually unique cast, especially Pearl and Marina, who have gone from J-pop star outfits to costumes referencing Biggie Smalls and Tupac.

Adding to the game’s varied music, the DLC’s soundtrack, titled “Octotune,” introduces new genres to the mix. Like the game’s plethora of in-universe bands that write music of different styles, most of the songs belong to Dedf1sh, who performs hip hop, 80s synth, techno, and even vaporwave. The highlight, however, is the final boss theme by Off the Hook, which may be the best song in the series.

Despite being the only paid DLC in a series that pioneered Nintendo’s string of constant free updates, “Octo Expansion” is justifiable in its different content. Free updates include multiplayer content for everyone, including new weapons, maps, and gear, but this paid DLC is designed for fans of the campaign, and while a few pieces of gear are available as rewards, it isn’t pay-to-win, so the expansion is off the hook.

“Octo Expansion” is a shining example of worthwhile DLC, not only for adding extra single-player content to an excellent campaign, but still remaining its own entity in aesthetics and gameplay. While players who skipped the campaign may not be interested, for those who enjoyed Octo Canyon, it’s worth shelling out a little more cash for another incredible experience that only the Splatoon series could offer.

“Splatoon 2: Octo Expansion” is available on the Nintendo Switch eShop for $19.99 and requires “Splatoon 2” to play.

Visit the Electric Retrospective blog at https://electricretrospective.wordpress.com/ for a review of “Splatoon 2,” as well as other gaming news, editorials and reviews.

Like Loading...
‹ Photo of the Week: Binder plays in home match against Rockwood Summit
Voices of Webster: October 3, 2018 ›