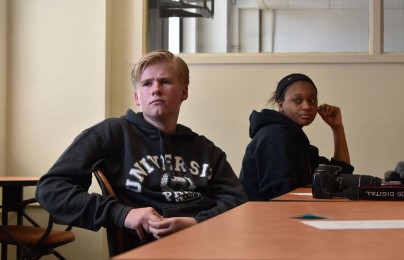 Sophomores Ethan Weihl and Jessica Peterson participate in discussion at the No Place for Hate meeting on April 17. About telling personal stories, Dr. John Raimondo said, “To me that is the most powerful way to better understand how other people experience the world.” Photo by Lindsey Bennett.

Forming a new student-led group is one way the school is hoping to tear down racial biases and inequality.

No Place for Hate is a movement through the Anti-Defamation League (ADL). According to the ADL website, it is a nationwide campaign formed to tackle prejudice, bullying and intergroup conflict. The initiative is focused around empowering students, parents, teachers and administration to make their school a safe space for everyone. Over 1,600 schools across the country are using this model to create change.

Recent events highlighted at Webster show that work has to be done. A January ECHO article titled “Swastikas bring up topic of social injustice” described incidents during the school year that show students still looked through a biased lens.

Junior member Philip Freeman said, “That is a story that we can all tell, but there is also a lot of smaller stories, of microcosms of that, that happens in our school and personally affect someone but probably aren’t seen by a lot of people.”

Dr. John Raimondo was introduced to the program by a parent. He decided No Place for Hate would benefit the school. Raimondo said the purpose is to “take a broad look at the school and then instead of talking about it, what can we do to make it a more inclusive place?”

To become a designated No Place for Hate school, the whole student body is invited to sign a resolution. It is up to the group to decide how to present the pledge.

The resolution is provided by the ADL and includes commitments like, “I will speak out against prejudice and discrimination” and “I recognize that respecting individual dignity and promoting intergroup harmony are the responsibilities of all students.”

The next step in the process consists of the committee creating and sharing three activities to the entire school. These activities should be centered around anti-bias and bullying prevention.

As of now, the group is looking at possible projects that work with the drama or art departments. Ideas include a skit where people are presented with different derogatory or hostile slights, snubs or insults and are forced to navigate those situations, much like a possible student’s everyday life.

Meetings began in late March, and the group is aware there is not much time left on the school calendar. It is more focused on how to start the 2018-2019 school year. Whether it is a welcoming event during the first week of school or the signing of the resolution, the members want students to grab hold of the values they are conveying through their work.

“The main goal is to make sure that all of the students are keeping more of an open mind and they’re taking this initiative for themselves as a student and not just saying, ‘that group is doing it, they’ve got the handle,’” Freeman said.

Although the core committee is limited to 10-20 nominated students, there are still going to be ways for others to become involved. The projects that No Place for Hate implement require students coming forward with their own personal talents, such as drama, art or music to make the wheels turn.

Freeman said, “We want to bring everyone in as a community, so we can all take this movement together and create a good environment for everyone.”