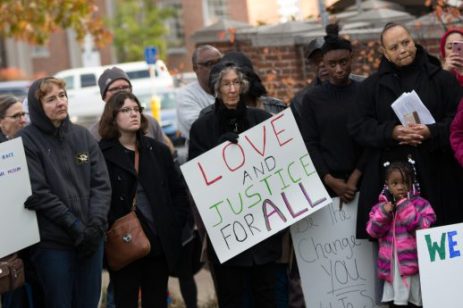 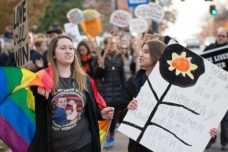 It only took five tries, but on Nov. 25, Webster Groves students, citizens and alumni held a protest march from city hall to Old Orchard regarding the president-elect Donald Trump and his policies.

Before the march, 2016 graduate Jakini Ingram spoke to a crowd of a couple hundred in front of city hall.

After the speeches at city hall, protesters walked down the sidewalks along Lockwood Avenue to the gazebo in Old Orchard. The protesters could not march in the street because no one from the protest had a parade permit.

The march was put together by Ingram and 2016 graduates Bonnie Randall, Bekah Perman, and Gianna Metzker with help from other current students and alumni.

St. Louis residents attend “Beyond Van Gogh: an Immersive Experience” on Tuesday Oct. 19. The exhibit displays over 300 of Van Gogh’s works. The paintings are showcased in a 30 minute show that “makes you feel as if you have directly stepped into a Van Gogh painting” as described on the website. Photos by Ava Musgraves