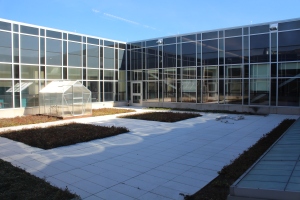 The sun beats down on the third floor garden greenhouse during school. Science teachers Regina Lynch, Kyle Lockos, Jeanette Hencken and Marty Walter all have classrooms that face the garden. Photo by Jack Killeen

There’s the Botanical Garden, the Garden of Versaille, and then there’s the third floor of Webster Groves high.

You’ve probably never noticed it because as gardens go, it’s a real dandelion.

It looks as if this woebegone green space was drafted by an architect whose yard has brown grass and dead roses.

Just like the Dust Bowl of the Great Depression, this garden lacks adequate topsoil. It seems to be an after thought of some draftsman more concerned with adding a few windows and diverting water runoff to irrigate the baseball and softball fields.
How bad this garden is can’t be understated.

*If this garden were a security guard, he’d be asleep in the front hallway watching football highlights when a dozen students sneaked out to go to McDonalds.

*If this garden were the school nurse, she’d have a Marlboro in her mouth and a jelly doughnut in one hand while she takes your temperature.

*If this garden were the Kirkwood Pioneers, Webster would have won the Turkey Day Game.

It’s a swimming pool-sized space on the third floor in the science hallway surrounded by four classrooms. Its soil is only three-to-six inches deep and mixed with pea gravel, making it too shallow for anything with roots.

“We realized right away that the garden is something no good for planting,” Chemistry teacher Margaret Skouby said.

Sedums and vinca, not to be mistaken for weeds, reach two inches out of the soil and add to the gloom and ethic of underachievement that the garden suggests.

The four teachers whose classrooms face the third floor garden- Kyle Lockos, Regina Lynch, Marty Walters and Jeanette Hencken- have an agreement about the garden. If one of them wants to take a class outside, one must tell the other three beforehand, and if one of the three feels it would be distracting to the class, it only takes one teacher to veto the other three, and no one goes outside.

Each class has blinds, and Lockos’, Walters’ and Hencken’s desks face away from the windows. Not only this, but according to an A-student of one of the four teachers, his class watches CSI three-tofour days of the five days in the week.

To recap, each classroom has blinds, desks for three of the classes face away from the window, and one of the classes watches a TV show most of the time. As long as the students are quiet enough, how would classes in the garden be distracting?
For all its botanical flaws, the garden is structurally sound. Construction manager of the new addition Rob Stuber said the garden was built as an outdoor classroom design and is capable of holding up that weight.

The problem is the garden is neither beautiful nor functional. It sits there sending a message of mediocrity to students who are told that they share the hallways with some of the greatest minds in the world. The underlying message is “Oops… the adult world goofed, but keep studying.”

To make this garden better, Webster could replace the pea gravel with better soil, get pots, make the planting trays deeper and at least try to let classes use the garden.

If students find watching people in the garden more interesting than class, it’s not their fault. It’s the fault of teachers who aren’t making their class more exciting.

In summary, if this garden were a second grader, it’d be picked last for kickball.

Dr. Jon Clark, principal, is eager to use the garden. He said, “I will continue to talk to teachers about how to use [the garden] because it is a beautiful space.”

To the students who walk past it, this garden says that you can make a mistake and act like it doesn’t exist. It’s time the district addresses this garden and uses it for something other than light and water.