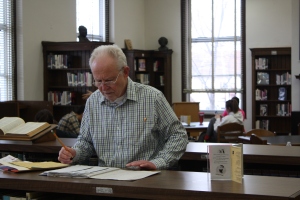 Not all heroes wear capes. Of the 100 Fitzpatricks who live in St. Louis there is only one that WGHS students hope for as a sub: Mr. Tony Fitzpatrick.

Fitzpatrick’s teaching skills took shape right out of college. In fact, the first dollar he earned after graduation was by substitute teaching in the Urbana IL School District. Since 1972 Fitzpatrick has been certified in Illinois to teach English for grades seven-12, and although he spent most of the 70s teaching, he later started to stray from the classroom for about 31 years.

In this time, Fitzpatrick began his career as a senior science editor at Washington University in 1987. He still freelances for Wash. U. and continues to write in his downtime. His writing focuses mostly on science for Wash. U. and the U.S. Department of Energy.

In 1993, Walker and Co. of New York published Signals from the Heartland Fitzpatrick’s own book about ecologists, ecology and natural renovation of Illinois and Missouri. Fitzpatrick was motivated and inspired to begin writing by “some of the most outstanding” high school and college teachers and writers. The passion that was sparked in Fitzpatrick is the same motivation he promotes while teaching.

“Getting a book published was the attainment of my dream that began in high school. I have often told students to hold onto their dreams; it’s worthwhile!”

In the classroom Fitzpatrick has succeeded, graduating from University of Illinois with a English Education degree and teaching for 12 years, but there is an unknown athletic side to him. Through high school his athletic ability allowed for the 5’ 11” Fitzpatrick to play three sports and to play them well enough to get offers for football, and to end up playing his favorite sport, baseball, at University of Illinois. Fitzpatrick had trouble staying ahead at such a difficult school, so he stopped playing after his first year, but after college he went into coaching.

Fitzpatrick’s first real job was in Genoa, IL, 15 miles north of DeKalb (Northern Illinois U., where Jason Meehan has played D-I football the past four years). He coached football, basketball and baseball at Genoa for two years. Fitzpatrick led his varsity baseball team to a district championship in 1974. The team was gathered from an enrollment of about 420 students, and it beat a team from Rockford who had four times the number of students. This is something Fitzpatrick is still very proud of.
Fitzpatrick is known best in classrooms joking with students and helping their English skills.

“I find subbing fun and engaging. I see the warmest, truest, most genuine smiles at all the schools, but especially the high school” said Fitzpatrick. Fitzpatrick’s style of starting the class with jokes acts as a way to gain the classes focus at the start of the class.

“As a sub, you about five minutes of information you need to share and with jokes you can focus people right away,” said Fitzpatrick.

About having Fitzpatrick as a sub, senior Jordan Shumate said, “I feel like a kid getting taken out for ice cream. Fitzpatrick is always very personable and gets to know us as people.”