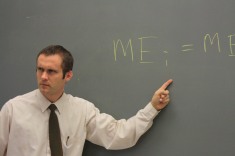 Not until his junior year in high school did science teacher Dr. David Schuster learn what he wanted to pursue in his life—Physics.

At the time, Schuster would wear red spiked hair one week and show up dressed like a monk the next. However when his teacher inspired him to live the physics life, he took things a bit more seriously.

The whole teaching thing wasn’t the plan all along; in fact, it wasn’t decided until his last year of Grad School.

“My plan was to study physics in France,” Schuster said. “It seemed like the best scenario possible. I was even getting my minor in French. However, as time went on, things started to get a bit boring.”

“I was studying ‘amorphous GaN,’ and during that time I wasn’t really interacting with anyone.”

It wasn’t until he started tutoring people that he learned how much he loved helping and teaching. That was when he ditched the “physics in France” idea and set his sights on teaching.

Schuster was hired as a physics teacher here at Webster after getting his PhD.

Now five years later, he teaches Physics A and AP Physics, runs the physics club and is an assistant coach for men’s cross country.

About his favorite part of teaching, Schuster said it’s how he “can get a student who isn’t excited about physics (or school in general) and turn that around.”

“I’m not only here to help kids get an education, but I’m also trying to do all I can to ‘Save America.’” Schuster said. He believes that in a way, American youth have lost the desire to thrive and excel, and he wants to do whatever possible to try and change that. It might be a pretty tough thing to do, but Schuster “loves a challenge.”

Some wonder if Schuster will turn into the next Wojack.

“I certainly don’t plan on breaking the Wojack record; I don’t want to teach for that long. I don’t know how he still does it and loves it so much, He’s too awesome,” Schuster said.

A man with his PhD and Masters in physics could eventually become a college professor but that seems highly unlikely since “I plan on retiring here. I really like Webster,” said Schuster.