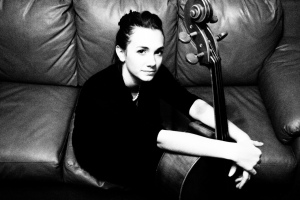 Junior cellist Anna Bird poses with her cello. Bird is the first orchestra student from Webster to make All-State. (Photo from Amy Bird)

Junior cellist Anna Bird made the All-State orchestra and was the only one to make it for Webster. Not only was Bird Webster’s only, but she is also the first ever to make All-State for Orchestra.
It was a long road to All-State for Bird as she put it, “The audition process this year was chaotic. The live audition was cancelled twice due to winter weather. We ended up sending recordings.”
Bird said she felt “a combination of anxiety, excitement, and nerves” while auditioning for All-State.
After making All-State, Bird said she was mostly relieved it was over and she had made it. “A successful audition is always rewarding because you feel like all your hard work has paid off,” said Bird
“She practices multiple hours a week and is also a member of the Prep program at the Community Music School,” said Poe.
This is also the first year any Webster students auditioned for All-State orchestra as well. Orchestra teacher Leah Poe said, “It feels really great to be here to encourage the students to go out and take these opportunities.”
“Anna is, as Ron Burgundy would say,’Kind of a big deal.’  Only 14 cellists were chosen from the entire state, and she is one of them,” said Poe.
Bird was one of five other students who auditioned for All-State. “I am so honored to have the opportunity to play in an orchestra with such fantastic students,” said Bird.