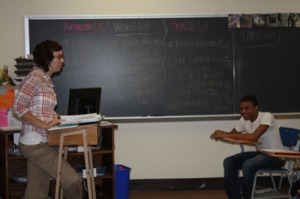 Her favorite thing about being an academic lab teacher is seeing students work hard to achieve their goals. If Keane could teach any other subject, it would be English. She has just earned her M.A.E in Secondary English Education. She encourages her students to use their time wisely while in her class.

Keane likes to make learning fun for students in the English classroom, while in academic lab she likes to be more focused and to the point. Keane would also like to be an English teacher, teaching creative writing or contemporary American literature or maybe an inventor.

Nedra Clark is one of the new communication arts teachers. She originally wanted to be a substitute teacher and a full time graduate student. After she spent more time in the classroom, she realized that she wanted to become a full time teacher.

If Clark could teach any other subject, it would be psychology. She loves to discuss theories behind how the mind works.

About what she loves most about teaching English, Clark said “I love that I can escape reality and become a character in any story I read. It’s like a free vacation.”

Clark really believes if students do well in high school, they do well in life. Clark tries to teach this to her students. She likes to bring real-world aspects to her classroom to make things connect more with students in a fun way.

If Clark could have any other job, she would want to be a meteorologist or a nurse anesthetist.